More accurately, this gallery should be titled "Weirdlings & Miscellaneous," but that isn't very elegant. When I let my pen and imagination wander with no set destination, weirdlings are born. They are humanoid entities, sometimes beautiful, sometimes grotesque (or better yet, a combination of both.) Many of the illustrations in this gallery are weirdlings, but not all of them are. Some of them are simply images that don't belong in my "Age of Pendraforme" universe, whether they be fan art, an unfinished picture book, or characters from a world predating Pendraforme.

The Empress of Electric Chairs

The mysterious Empress Vivae, God of Pendraforme, bringer of snow and lightning.

Dr. Phantine Shandkov is a renowned Para-Amplexic scientist. Like all Friends of her breed, she consumes ghosts for sustenance. Here, she is drinking a ghost from the wall.

Welcome to the M Ward

The world's most dangerous merrïochists are kept here, in Corridor B of the M Ward.

Through the silver device worn about her head, merrïochist and experimental subject Glory is able to record lucid dreams, which are then sold under her artist's pseudonym, "Plague Violet."

Her full name is Arabela Ehrzebeta Lucia di Pendara. She is over 1,600 years old, and has lived more horrors than you can imagine.

Edward Qaasket is the sickest treplolorric merrïochist alive. The demons raging around him and the precipice beneath him are not literal, but metaphorical manifestations of his illness.

The Empress Vivae was once known by another name; the name she was given by her creators before the Age of Pendraforme.

Lord Valhalla thinks of himself as an artist. His medium is the flesh of children, and he has acquired quite a gallery over the decades. He has become hopelessly addicted to his sadistic rituals. 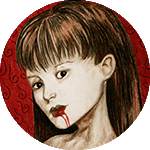 Glory Anne Vontaine was born into a family of criminal nobility. She was dubbed the "Pervert Princess" upon her arrest for merrïochry. 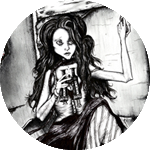 Belaluci has been alive a long time, and every century or so she'll suffer a complete mental breakdown. 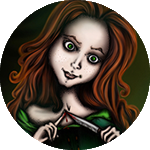 After his arrest, Lord Valhalla's victims are released - but one of them wants him back. Lenka is the only child to willingly take his name.

Viola Van Tan (one of the elders of the Vontaine family) and her pet assassin Miette Treplolorrae (after whom the condition "treplolorra" was named.)

Edward on the night of his first massacre; incidentally, also the night of his BeFriending. He merrïochized 28 Friends in the city of Sarissai within the span of 17 hours, and upon capture was still hungry. 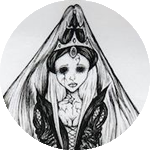 Belaluci hallucinates the ghostly figure of her dead lover, a princess she tended to 1,000 years ago. Was Belaluci her killer? Even she is unsure. 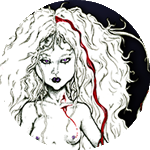 Part prostitute, part nurse, and part bloodbank, merriarchs are paid to cater to the needs of merrïochistic Friends.

The Heart of my Favorite Serial Killer

I asked for a drawing assignment, and a friend suggested I draw the heart of my favorite serial killer. So, I drew one of Lord Valhalla's victims, risen from the dead to rip out his heart.

Arri walking home from work - a dangerous and frightening thing to do alone when marked by the pentascral. 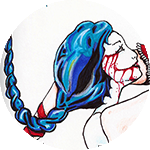 The dark artistry of Lord Valhalla.

Born with multiple deformities, Cecilie May was BeFriended into the circus to serve as an immortal sideshow act. She has the power to change her form, but cannot hold it for long. For her nightly performances, she shifts into her true form from that of a beautiful, flawless girl. 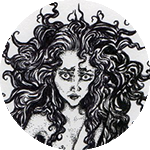 In her earlier life, Belaluci was enslaved by the Pendraformé, and forced to work as a gladiator.

Later in life, she managed to climb the ranks of the Morograd criminal underworld. She keeps remnants of her dead lovers fixed to her belt, and will not go anywhere without her beloved memento mori.

Dance of the Damned

Viola and Miette dance as Harlequin and Columbine. They belong to the Age of Pendraforme, but I have also imagined these two occupying other worlds. 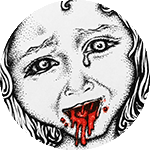 Lord Valhalla has extracted her teeth. Because he BeFriends his victims before torturing them, her teeth will grow back shortly, allowing him to extract them again and again.

Lord Remiel J. Cruusqe is one of the high chancellors at the Haven of Surmaanque in the city of Kiuramanté. He is Lord Valhalla's progeny, but has rejected his cruel father.

Miette and Viola, engaged in sado-masochistic playtime once again. This time, Miette is not only an assassin - she's a cyborg assassin.